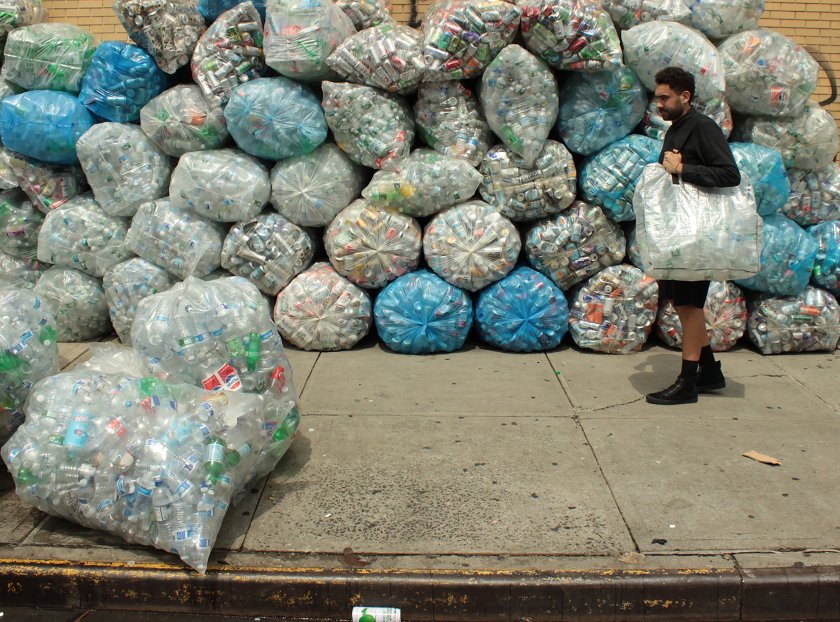 Desenhos Interessados, a performance by artist Mano Penalva started with a couple rules. During his AnnexB residency in NY, the artist chose public spaces to create “drawings” for. The drawings are performances that consist in him building a simple aesthetic formation: using empty plastic water bottles that he collected while living in the city, he arranged them next to each other, “drawing” a line at each public space he chose to perform. This line “walked” across the space: one of the performance’s rules was that Mano had to pick a bottle from the end of the row, placing it at the other end. When performing in the enclosed space of a park, for example, Mano patiently repeated the action of moving the plastic bottles, until his drawing led him to exit that particular space. In this case, the duration of the performance was determined by the time it took for Mano’s drawing to reach an exit.

The photographs of one of the performances, taken at Columbus Park, Manhattan and Morgan Avenue (BMT Canarsie Line) in Brooklyn, show the delicacy of this simple aesthetic action. One sees Mano, who is around 6’2”tall, leaning towards the small bottles on the ground, while park goers look at his gesture with curiosity. The drawing prompts adjoining visual relationships: for example, a relationship between Mano’s body’s verticality and the horizontality of the water bottles row. The volume and weight of his body contrast with the vulnerability of the empty bottles that fall with ease as the wind blows more strongly, or when passersby unintentionally (or intentionally) kick them.

Other aesthetic relationships are formed between the “alien” line of bottles and the original landscape or architectural design of the public space. The row of bottles immediately interferes in the space it occupies. Depending on the spatial configuration, Mano drew curved, skewed, or straight lines that conversed with and temporarily altered the stable design of the place. On the one hand, the row of plastic bottles often formed a slight barrier, not completely obstructing, but altering the routes people could take to move around that space. On the other hand, the drawing also delineated or emphasized preexistent elements in the park, such as a pathway design, or a garden railing. A third aesthetic relationship happens between the row of bottles and the bodies of the passersby: there were those who only observed the construction of the drawing from afar, while other park goers actually interacted with the artist during the performance, offering additional bottles to the composition.

Mano often constructs works from objects that had previous lives as commodities. He often uses “cheap” materials, such as nylon bags, raffia sacks, rubber rugs, plastic plumbing tubes, and even Cheetos, or objects bought in popular or informal markets, to make three-dimensional compositions––sculptural or painting-like. When Mano’s objects inhabit the white cube, they flirt with ways through which artists such as Marcel Duchamp or Andy Warhol used found objects. Yet, his dialogue is neither with the commodity that is named art to become a ready-made, nor his practice is simply a critique (or celebration) of capitalist culture, such as some of U.S. Pop Art was. The objecthood that Mano is interested in is always in dialogue with the realm of aesthetics but expands into the circuits of exchange and social meaning that these objects or materials participate in, while used as commodities.

InDesenhos Interessados, it is as if Mano would breathe a new meaning into a commodity object––the plastic water bottle. Placed in an aesthetic arrangement, occupying the public space as a group, the empty bottles continue to carry the signified of nourishing the basic human need of hydration. However, as Mano reminds us, in a global capitalist system, water bottles as commodities have also acquired other layers of meaning: they are fashioned to look like lavish products, used globally almost as touristic souvenirs that are disposable, consumed quickly. By selecting these bottles, arranging and presenting them as a type of “social drawing,” Mano calls attention to how they look like––the delicacy of their bluish transparency, the variety of forms they come in, the vulnerability conveyed by an almost weightless object––but he also suggests a shift in the way one sees and attributes meaning to these objects. The gracefulness of his gesture, treating that every-day “product” in “unusual” ways also extends the lives of these objects, enabling aesthetic and symbolic relationships that start to exist beyond their capitalist upbringing, and imprisonment. Park goers do not only look at Mano’s action, but they start to pay attention to what theycan do with these overlooked objects––how these new relationships develop depend on previous normative relations between a product and a culture.

On Morgan Avenue (BMT Canarsie Line),Brooklyn,one of the public spaces that performance took place, for example, Mano interacted with audiences that occupy the street space every day. In such highly disputed transit areas, Desenhos Interessadosbecame defiant acts. As aesthetic and physical arrangements, the performance required subway commuters to deal with an unusual type of obstacle: an artist creating a row of plastic water bottles, deciding to democratically use the sidewalk in ways that did not conform with their everyday use of that street. Some commuters merely kicked the bottles, others moved on without stopping to look. Street vendors that remain at that space for a longer span of time watched Mano’s action in contentious ways, mocking it, trying to define or change what he was doing. Those interactions revealed the power of Mano’s rupture with normality. A simple and ephemeral line of plastic water bottles created an unexpected disruption in the flow of people and goods of that specific space, exposing informal hierarchies created by how different social classes use, and dispute, global cities’ spaces.

In a sense, Mano’s work dialogues with practices such as David Hammons’ and Felix González-Torres’s, for the way Mano proposes precise transformations via simple combinations or arrangements of objects and materials. …

Mano’s Desenhos Interessadoscould also be put in dialogue with the practice of famous Brazilian artist, Cildo Meireles, whose early “insertions into circuits” dealt with the way through which certain commodities – such as the Coca-Cola bottle – could be used to combat the repression of the military dictatorship in Brazil. … Yet, Mano does not seek to define or dictate specific messages to his viewers: it is not “education” that he seeks, but a new mode of enchantment out of the most ordinary objects that gain the affection of usually modest users, such as the street vendor, the housewife, the park goer, or the subway commuter. Mano does not expect to subvert capitalism, he does not seek these objects’ redemption, but he extracts and nurtures the way culture – and thus art – radically transform these objects. Desenhos Interessadosbecome objects full of life, re-energized and offered back to an audience through another purpose: they become gifts.

The power of gifts in our times is often overlooked: a gift is a bond, a connection between gift giver and receiver. Within gift giving, there are sub-categories: the unsolicited gift, the unwanted gift, and the returned gift. Following earlier anthropological studies, in his book The Gift, Marcel Mauss studied the systems of gift giving and gift exchange in North and South American indigenous societies. Mauss argued that giving a gift, within systems of exchange through which these societies functioned, always demanded a type of reciprocity: there was no free gift. For Mauss, the gift was not part of a system built on simple altruism; instead, within those societies, it triggered cycles of commitments, debts of honor that should be “paid” later.

In Virgil’s Aeneid, Trojans accepted the Greek Wooden Horse as a harbinger of their victory, though it first provoked suspicions among them. Very quickly, however, the gift became an omen of their subjugation. The Greek sculpture’s massive size and its exquisite crafting lured the Trojans: said to be a votive offering to Pallas, the gift was considered inoffensive and thus taken into the citadel. As the tale goes, while Trojans slept during the night, Greek warriors hidden inside the horse sneaked out of it, invaded, pillaged and destroyed Trojan homes. The gift, which had been seen as a gesture of Greek submission, shifted the power positions in war. The combination of the gift, its impressive aesthetics, and the Greek’s cunning resulted in a reversal of Trojans’ initial triumph.

Desenhos Interessadosmay look like a harmless gesture compared to the Greek mythology’s Trojan Horse, yet the work’s power comes from its subtlety: an ephemeral offering that produces a bond between objects and an audience that is not always expecting such gift. If the bond Desenhos Interessadosproposes is delicate and transient, it still generates a type of magic. Not the “magic trick,” or high-tech illusion effects, instead, the ancient magic of the object that happens through material and spiritual bonds. But as Mauss reminds us, there is never a free-gift and for this magic to work it is necessary for us to give the work something in return. Perhaps, what Mano asks from us is that we become aware of our own pace and look at other ways through which objects can charm us.

Born in Salvador, Mano Penalva studied at the Escola de Artes Visuais, Parque Lage, Rio de Janeiro, and holds a degree in Social Communication from PUC-RJ. His work involves appropriations of material culture, especially products and materials that he collects during his travels across global cities and found in popular street markets. In Garden for David Hammons, a work that took place in Mexico City, Mano had plastic flowers put up for sale over a green sailcloth on the sidewalks of the city: both an exquisite composition and a public art gesture. Mano has had solo exhibitions in Mexico City, at the Soma Gallery, the Central Gallery, and Art Museum of Ribeirão Preto, all in Brazil. His work has appeared in institutional exhibitions across the world, such as in Brussels, Barcelona, Venice, Paris, and New York.

© [COPYRIGHT Tatiane Schilaro Santa Rosa], 2018. No part of this site may be reproduced in whole or in part in any manner without the permission of the copyright owner.